The ICELAND-INV18 project has concluded with success!

The ICELAND-INV18 project has concluded with success!
January 25, 2021

The ICELAND-INV18 project has concluded with success!
Posted by Posts LMT on January 25, 2021 in eInvoicing, ICELANDINV-18, R&D_funding 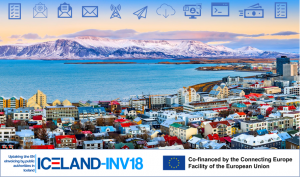 Started in April 2019, the ICELAND-INV18 action (Uptaking the EN eInvoicing by authorities in ICELAND) is an eInvoicing initiative co-financed by the European Commission, through its Innovation and Networks Executive Agency (INEA) and under the CEF Telecom Program (Action number 2018-EU-IA-0056), seeking to promote the uptake of the eInvoicing Building Block for a digitally connected Europe and, in this sense, enhancing the cross-border transactions, businesses and electronic processes between Iceland (member of the European Economic Area) and the European Union Member States.

After 22 months of project duration, the Icelandic entities of the Consortium have finally got eInvoicing solutions integrated with their corresponding ERPs to receive and process electronic invoices aligned with the European Directive (2014/55/EU) and the European Standard (EN16931).

To reach this goal, and always with the Coordination of Universitat de València (Spain), and the expertise and technical support of LMT Group (Spain) and Unimaze (Iceland), the participants have gone through several stages and concluded different tasks such as the analysis of their national legal context, technical requirements for the implementation, the creation of a Central Validation Service, the technical deployment, and the passing of several tests including operation tests and the official CEF eInvoicing Conformance testing. Now, we are glad to announce the proper conclusion of this project; we will keep working towards an increasingly connected Europe.

To know more about how the ICELAND-INV18 project was developed, please, visit its official website: https://irtic.uv.es/iceland-inv18/