The EURINV action has been highlighted as a successful reference in the area of eInvoicing
February 2, 2021

The EURINV action has been highlighted as a successful reference in the area of eInvoicing
Posted by Posts LMT on February 2, 2021 in CEF Funding, eInvoicing, EURINV 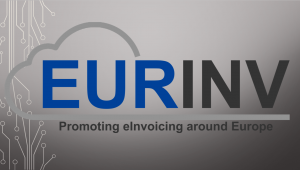 The EURINV project (Implementing the European Standard in consolidated eInvoicing cloud platforms), which concluded last september, has now been chosen by the Innovation and Networks Executive Agency (INEA) as a reference action and an example of success supporting the deployment of digital networks and cross border interoperable services across Europe, in the scope of the eInvoicing Building Block. More information in the CEF brochure.

EURINV was indeed a strong action, whose Consortium involved up to 12 institutions. Under the coordination of Universitat Politècnica de València (Spain) and with the support of LMT Group (Spain) as the technical manager, the partners, Billit (Belgium), OpusCapita (Finland), S.A.T.A. (Italy), Eckonomická Univerzita v Bratislave (Slovakia), Enxendra-Docuten (Spain), Calvi (Netherlands), Generix (France), Celtrino and Dublin Simon (Ireland), and Webware (Germany), worked intensively during the 18 months of project duration to enable the eInvoicing solutions implemented by the EDI providers of the Consortium and their clients to meet the European Standard (EN) on electronic invoice for cross-border transactions according to both the Directive 2014/55/EU and their Member States’ legislation in invoicing.

After different stages and tasks the EDI Providers’ eInvoicing cloud platforms were upgraded to finally offer to their clients a fully EN conformant eInvoicing solution, including both syntaxes approved by CEN (UBL 2.1 and CII), and achieving advanced eInvoicing functionalities. Additionally, the participant use cases were able to process eInvoices from other Member States.

Therefore, the EURINV project (co-funded by the CEF Telecom program of the European Commission, with action number 2018-EU-IA-0073) was conceived as an international initiative to promote the uptake of electronic invoicing, aiming also at unifying different digital processes in the European Union, in the certainty that a common standard for cross-border transactions represents a time-saving, secure, and efficient solution for procedures.

To know more about how the EURINV project was developed, please, visit its official website: https://lmtgroup.eu/eurinv/